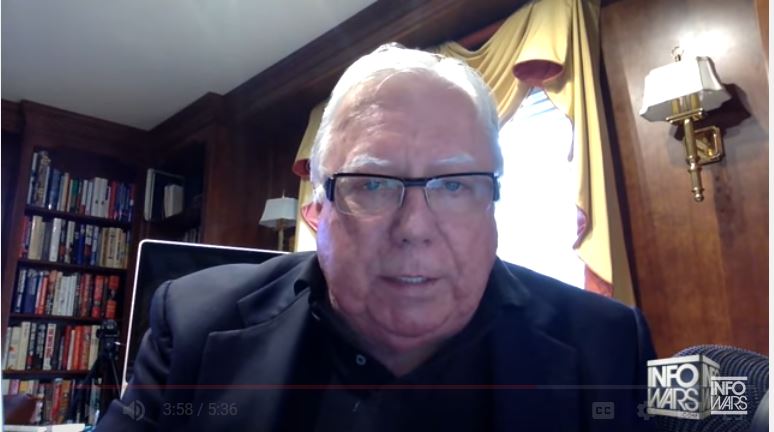 Stone was referring to John Podesta, manager of Hillary Clinton’s 2016 presidential campaign, whose emails had reportedly been stolen and obtained by WikiLeaks.

Democratic opponents, as well as special counsel Robert Mueller, reportedly believe that tweet somehow proves that Stone was tipped off to the eventual release of Podesta’s emails by Wikileaks founder Julian Assange and/or ‘the Russians,’ who Clinton backers say “hacked” Podesta’s account.

But that’s not the case at all, according to Jerome Corsi, conservative author and former Washington Bureau Chief for Infowars. In a column on Friday, he noted, “Having reviewed my records, I am now confident that I am the source behind Stone’s tweet.”

Corsi, who has been linked to Stone, made the claim, as other reports noted, he was “in plea negotiations” with Mueller, though it wasn’t clear what alleged crimes would be included in any final deal. Corsi announced in a video on Nov. 12 that he expected to be indicted by Mueller, possibly for making false statements before Mueller’s grand jury, where he has appeared twice.

“Prosecutors are interested in Corsi’s interactions with Stone and an American academic named Ted Malloch. They want to know whether any Trump associates had advance knowledge of WikiLeaks’ plans to release emails that were stolen from Clinton campaign chairman John Podesta. WikiLeaks, which was founded by Julian Assange, began releasing the emails on Oct. 7, 2016,” The Daily Caller’s Chuck Ross reported Friday.

TheDC reported that Corsi has claimed in the past he had never met Assange and did not have any inside knowledge of Wikileaks’ planned releases of the Podesta emails.

“I was telling people as early as August, I thought Assange had Podesta emails, and I thought he was going to drop them in October,” he told TheDC on Nov. 13, adding that he came up with the theory on his own.

Corsi also said he believed that Stone was one of the people he told, though Stone vehemently denied talking to Corsi, whom he reportedly met in 2011, about the Podesta emails in a separate interview with TheDC.

Writing for Infowars, Corsi said he began investigating “Clinton’s ‘reset’ policy with Russia, Podesta’s membership on the board of Joule Global Holdings, N.V. – a shell company in the Netherlands that Russians close to Putin used to launder money – as well as Podesta’s ties to a foundation run by one of the investors in Joule Energy, Hans-Jorg Wyss, a major contributor to the Clinton Foundation.”

The New York Times reported on Aug. 14, 2016, that a secret ledger in Ukraine listed cash payments for onetime Trump campaign manager Paul Manafort, who has since been convicted for financial crimes by Mueller, and who was then a consultant to Ukraine’s former President Viktor F. Yanukovich. Corsi wrote that after the story was published, he suggested to Stone they counter it with a report of their own.

“My plan was to publicize the Government Accountability Institute’s report, ‘From Russia With Money,’ that documented how Putin paid substantial sums of money to both Hillary Clinton and John Podesta,” Corsi wrote, adding that on the same day the Times story was published, he began researching for Stone a memo he titled, “Podesta.”

Between Aug. 14 and Aug. 31, 2016, Roger Stone and I had several detailed conversations about the Podesta research.

When Stone wrote his “suspicious” tweet on Aug. 21, 2016, he and I planned to publish a one-two punch, using the Government Accountability Institute report to expose Hillary and Podesta’s ties to Russia.

Looking for a narrative

Writing for WND.com, Corsi published the first in a series of stories on Oct. 6, 2016, that detailed Putin’s financial ties to Clinton and Podesta. That first story contained much of the research compiled for the “From Russia With Money” report.

A week later on Oct. 13, Corsi notes that  Stone published an article on his own website headlined, “Russian Mafia money laundering, the Clinton Foundation and John Podesta.” An analysis of both articles shows that the writers both incorporated similar research.

“To be clear, although I have had some back-channel communications with Wikileaks I had no advance notice about the hacking of Mr. Podesta nor have I ever received documents or data from Wikileaks,” Stone wrote. (Related: Roger Stone: Friend Jerome Corsi being ‘squeezed hard’ by Mueller but he won’t break.)

Corsi himself believes that Mueller’s team is simply trying to create a WikiLeaks connection out of thin air. “They seemed determined to find a connection with WikiLeaks and me,” he told NBC News.

“I think my only crime was that I support Donald Trump,” he told ABC News. “That’s my crime, and now I’m going to go to prison for the rest of my life for cooperating with them.”

Following the publication of Corsi’s Infowars piece, sources told NewsTarget that his lawyers have informed Stone’s attorney that Mueller’s team is pressuring the former DC bureau chief to recant it.

Roger Stone has been under serious legal assault for months and for no apparent reason other than his association with the president. Please consider a donation to his legal fund to help him offset these escalating costs. Visit StoneDefenseFund.com.