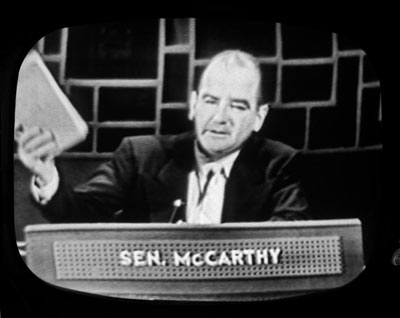 From time to time you may have heard an American Leftist use the term “McCarthyism,” but maybe you’re not exactly sure what the term means or refers to.

A popular definition for McCarthyism is that it’s a “a vociferous campaign against alleged communists in the U.S. government and other institutions carried out under Senator Joseph McCarthy in the period 1950–54. Many of the accused were blacklisted or lost their jobs, although most did not in fact belong to the Communist Party; a campaign or practice that endorses the use of unfair allegations and investigations.”

The Democratic Left hates McCarthy a) because he was a Republican; and b) because his “Red Scare” blacklists of suspected communists — this was a big deal in the 1950s due to the rise of the Soviet Union as a superpower — included many people in Hollywood.

Today, however, Left-wing Democrats love McCarthyite blacklists and they are increasingly using them as political weapons to target POTUS Donald Trump and his supporters in their quest to impose, not win, complete control over all of the United States.

As The Gateway Pundit reported, Marxist organizations like the misnamed “Restore Public Trust” have compiled lists of current and former Trump administration officials who they claim are “responsible” for policies like family separation at the border — a complete lie, since that particular “policy” actually stems from a court decision by the very liberal Ninth Circuit decades ago (1997), as The National Sentinel reported Monday.

Corporate America should not allow administration officials responsible for Trump's family separation policy to seek refuge in their corner offices or boardrooms.#FamiliesBelongTogetherhttps://t.co/J0CZcUpklk pic.twitter.com/KMveqNPb52

As outgoing Homeland Security Secretary Kirstjen Nielsen looks for her next job following her resignation Sunday, she may find herself battling a liberal blacklisting effort against those who’ve served in the Trump administration.

Nielsen’s name appears on a list that a cabal of immigration and civil rights groups recently sent to the CEOs of American companies, urging them not to hire Trump officials who were involved in last year’s separation of migrant children from their families.

If you run ‘afoul’ of the Left’s political agenda, you’ll be blackballed and destroyed, financially

A letter to corporate CEOs from the group states, in part, “Some of these individuals have left the administration in recent months. Regardless of when they leave, they should not be allowed to seek refuge in your boardrooms or corner offices. Allowing them to step off the revolving door and into your welcoming arms should be a nonstarter.”

But this group isn’t alone. Democrats who have decried McCarthyism in the past are using the blacklist concept to force — force — compliance with their radical Leftist agenda.

Last summer former aide to Hillary Clinton and Sen. Chuck Schumer, Brian Fallon, in decrying the president’s pick of Supreme Court justices, wrote on Twitter, “Progressives should keep a list of names of the sellouts at Yale and elsewhere who are right now trying to smooth a path for the overturning of Roe and gutting of the New Deal. They should be unwelcome in future Democratic administrations.”

Progressives should keep a list of names of the sellouts at Yale and elsewhere who are right now trying to smooth a path for the overturning of Roe and gutting of the New Deal. They should be unwelcome in future Democratic administrations.

Translation: Only Leftist presidents get to pick Supreme Court justices, you see, and only those with ‘approved’ Leftist ideals. Everyone else should be blacklisted, unable to earn a living and cast out from American society.

In McCarthy’s day, his perhaps overzealous pursuit of communist infiltration within our government and culture was at least understandable. The Cold War was in full swing and we were teaching our children in school how to take cover in the event of a nuclear attack.

Now, however, the Left has bastardized a tactic it used to decry simply to impose their political agenda on the entire country. Big difference.