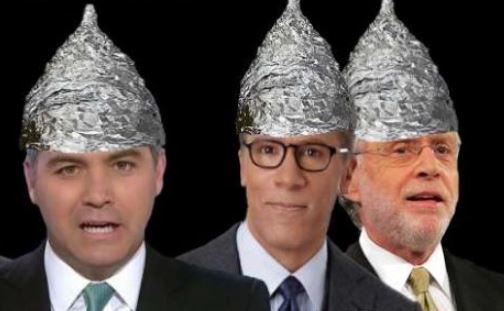 One fact buried deep in the 440-odd-page report by Robert Mueller and his Democrat-aligned prosecutors is that after nearly two years of investigating, not one American was found to have been involved in the principle reason the special counsel was appointed: “Collusion” with Russia to affect the outcome of the 2016 election.

The finding was blunt, as noted by The Intercept’s Glenn Greenwald, who cited the relative passage in Mueller’s report, which said:

The investigation did not identify evidence that any U.S. persons knowingly or intentionally coordinated with the IRA’s interference operation.

The IRA is the Russia-based Internet Research Agency that stands accused of having bought some Facebook ads and made Twitter posts aimed at influencing users’ opinions of both Donald Trump and Hillary Clinton.

This is a big deal because there is no shortage of political hacks on the Democrat side of the aisle who a) claimed that they had evidence candidate and then President Trump and his campaign members “colluded” with Russia to “steal the election” from Hillary; and b) still claim the Mueller report indicates this.

It doesn’t. In fact, Mueller’s report echos what Deputy Attorney General Rod Rosenstein said in the summer of 2018 when he announced that the special prosecutor had indicted the Russians and Russian companies:

So why do Reps. Adam Schiff and Eric Swalwell, both Democrats from California and the latter an actual 2020 presidential contender, continue to insist they ‘have evidence’ of collusion? Why do Left-wing talking heads making their rounds on the cable news circuit continue to suggest as much?

“Swalwell is a collusion ‘truther’, as is Adam Schiff,” said Fox News’ senior political analyst Brit Hume following the release of the Mueller report. He added that Schiff is “so invested in this theory” of collusion “that has been pretty, completely exploded.” (Related: EXONERATED: No collusion, no obstruction… Trump cleared in bombshell Mueller report, exposing bald-faced LIES of the anti-Trump media.)

Where are the apologies and resignations?

Meanwhile, Swalwell said Friday there “was certainly evidence of collusion” between President Trump and Russia — but Mueller simply deemed the evidence insufficient for the “beyond a reasonable doubt” legal standard.

For the administration’s part, officials are calling out these two embarrassments and, in the words of presidential counselor Kellyanne Conway, challenging them to “put up or shut up.”

“The Democrats — and their friends in the mainstream media — put so much into this. They’ve invested so much into this. … They got nothing,” Conway said, calling on Schiff to resign for “peddling a lie day after day” regarding the collusion allegation.

“I’m going to double down on that. Not only should he resign, he should produce the evidence that he says he has,” Conway added. “He ought to put up or shut up.”

The establishment media has every bit as much to apologize for as well. Like the Democrats they favor, nearly all major news outlets have been priming the collusion pump — so much so that, when Mueller initially filed his report and Attorney General William Barr issued a summary noting that the special counsel found “no collusion” evidence whatsoever, their ratings plunged.

For most of a year, the network’s ratings have been steadily improving with one of its hosts, Rachel Maddow, garnering double-digit increases to become MSNBC‘s prime-time behemoth, surpassing, on some nights, Fox News rival Sean Hannity.

On the Monday following the Friday report release, Maddow’s audience tanked by 500,000 viewers.

Neither she — nor Schiff or Swalwell — have retracted or apologized.

Read more about the dishonest media claims regarding the Trump-Russia collusion hoax at Trump.news and Hoax.news.