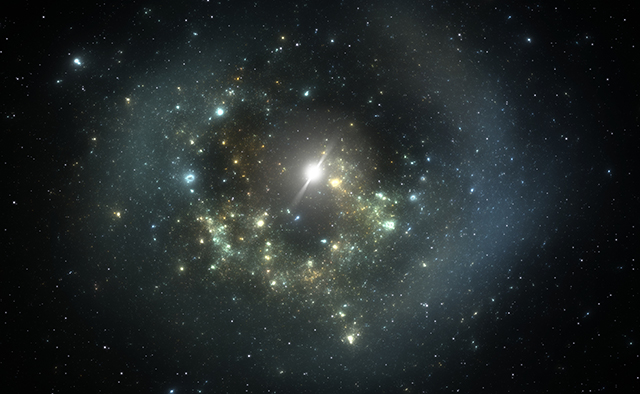 Astronomers from Germany and Russia discovered a rare celestial event: They found a star that came back from the dead.

The star was located in Cassiopeia, a constellation some 10,000 light-years from Earth. Even though it did not emit any visible light, it sent out strong infrared waves and solar winds. This piqued the researchers’ interest. Their study, which is published in the journal Nature, revealed that the mysterious star was a double white dwarf merger.

A white dwarf refers to a burnt-out star. When a star runs out of nuclear fuel, mainly hydrogen and helium, it dies. Nearing the end of its life, it begins to let go of its outer material, creating a light-colored planetary nebula. Once the fuel runs out, only its core is left. It cools down for the next billion years or so, roaming the vast universe. (Related: Some black holes bring dead “zombie” stars back to life just to rip them apart later.)

However, it is possible for a white dwarf to “come back to life.” If it merges with another white dwarf, they can make a new “star.” But those events are few and far between. According to a study from the Monthly Notices of the Royal Astronomical Society, only 11 percent of white dwarfs merge with another one.

“Such an event is extremely rare. There are probably not even half a dozen such objects in the Milky Way,” said study co-author Gotz Grafener from the University of Bonn in Germany, “And we have discovered one of them.”

The researchers were observing Cassiopeia through the Wide-Field Infrared Survey Explorer (WISE) satellite when they stumbled upon this mysterious star, which they named J003511. It looked like a gas nebula with a bright star in the middle. However, the star itself did not emit any visible light. Instead, it emitted exceedingly high levels of infrared radiation.

Since the satellite could not detect any sign of hydrogen or helium, the researchers thought it was a white dwarf. But J003511 was far from dead. On the contrary, if its infrared light was visible, it would be 40,000 times as bright as the Earth’s sun. Moreover, the star released solar winds that went as fast as 36 million mph.

A white dwarf was not capable of that, researchers thought. After running simulations, they found something that can: a double white dwarf merger event. J003511 was not one star, but two stars combined as one.

Researchers theorized that two white dwarfs formed near each other billions of years ago. Then, they circled one another and caused gravitational waves (distortions in space-time). The two stars cooled down over time and slowly lost energy, leading them to drift closer to each other. Eventually, they collided and merged.

The resulting star slowly reanimated. It had enough mass to begin burning heavier elements for fuel, like neon and oxygen. It began emitting infrared waves and solar winds. The two white dwarfs were no longer dead; they were now one star.

Till the end of another lifetime

Researchers agreed that it was a highly unique discovery. They pointed out, however, that the J003511’s resurgence would not last. Stars with its mass have their fates set.

In a few thousand years, it would run out of fuel once more. It would have turned its nuclear fuel into iron and slowly cool down. Because of its mass, it would collapse under the force of its own gravity. It would then crumble into itself as atoms begin fusing and transforming. The star would then explode. It would blast away its outer shell along with its elements: a supernova explosion.

All that would be left is a neutron star. Only a few kilometers in diameter, its mass outweighs that of the solar system. It would then continue to roam the rest of the vast universe.