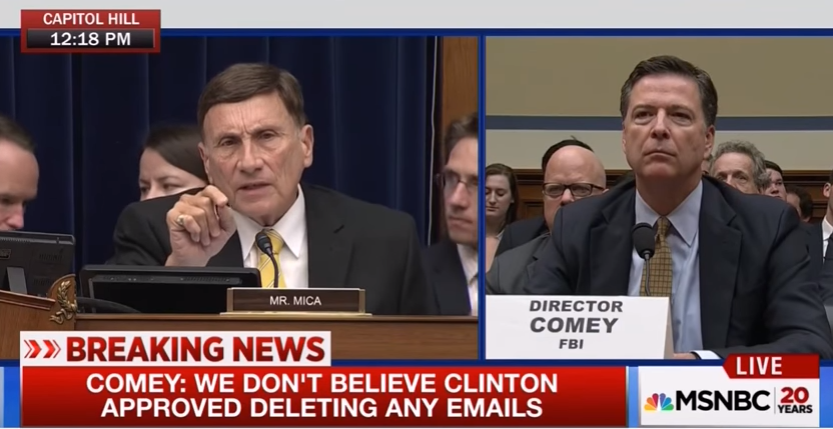 Well, coming from the former director of the FBI, this is quite disturbing. Or it ought to be to all Americans regardless of their political affiliation.

By now most everyone is aware that early in his term, POTUS Donald Trump — acting on the recommendation of his then-Deputy Attorney General Rod Rosenstein — fired FBI Director James Comey over the pathetic and politically motivated manner in which he (mis)handled Hillary Clinton’s criminal misuse of classified emails.

Since then, Comey has been on a tear against the president, railing on him at every opportunity (and he’s been given plenty of them, thanks to unprecedented Trump hate from the “mainstream” media) and claiming to come from a ‘holier-than-thou’ position of righteousness and morality.

Now, however, Comey has upped his rhetoric, and at a time when there is great concern about the tenor and tone of political rhetoric — so much so that a majority of Americans believe it’s going to lead to actual violence by next year’s election.

As noted by The Gateway Pundit, Comey on Friday sent out a tweet that can certainly be taken as a direct threat, given the amped-up political environment we now live in.

“We have long had ugly margins in this country, but we are a fundamentally decent people, with shared values. We treasure our identity as a nation of immigrants. With our voices and our 2020 votes, we must send Donald Trump and his mob back to their dark corner,” he wrote.

The former FBI director got a lot of pushback to his tweet online — a good sign — but given that he once held one of the most powerful positions in our government, this kind of talk ought to be concerning. (Related: ‘Severe, serious abuses’ by FBI, CIA are ‘going to come out’: Rep. Peter King.)

Not only does it signify that the Deep State remains committed to deposing Donald Trump for the ‘sin’ of beating Clinton, the most corrupt, criminally investigated presidential contender ever (aside from her own husband), but it proves that Comey and his ilk have no love lost for those of us who helped put Trump in office (and, hopefully, will line up to keep him there next fall).

Then again, this could be yet another desperate attempt by Comey to deflect. As TGP notes, he remains under investigation by the Trump Justice Department — Attorney General William Barr and U.S. Attorney John Durham, specifically, for his role in “Spygate,” the FISA warrant abuses related to that operation, and other potential abuses of the law and FBI/DoJ procedure.

Comey’s threat should be concerning to Trump supporters especially

The tweet comes amid another manufactured ‘controversy’ by the disgustingly dishonest ‘mainstream’ media — a pseudo-event, really — regarding tweets from POTUS Trump which he supposedly directed at ‘women of color’ in the House, because he’s such a racist, you see.

The texts — which never mentioned any names and did not mention anyone’s race — were directed at members of the House of Representatives who constantly complain about America and Israel and who never seem to find any good in anything having to do with our country.

Essentially, the president told these House members to “go back to where they came from” — their countries of origin — and “fix them” before returning to America and showing all of us how it’s done.

It was brilliant, tactically, because in a single series of tweets, the president made some of the most radical members of the Democratic House majority — Reps. Ilhan Omar, Alexandria Ocasio-Cortez, Ayanna Pressley, and Rashida Tlaib (“The Squad”) — the faces of the party whose leaders rushed to defend them.

Meanwhile, Comey and Co. have some more sweating to do. We haven’t seen any indictments yet, but “dark” words coming from a former FBI director should be concerning to every Trump supporter, because it sure sounds like a threat. Read more news about James Comey at JamesComey.news.