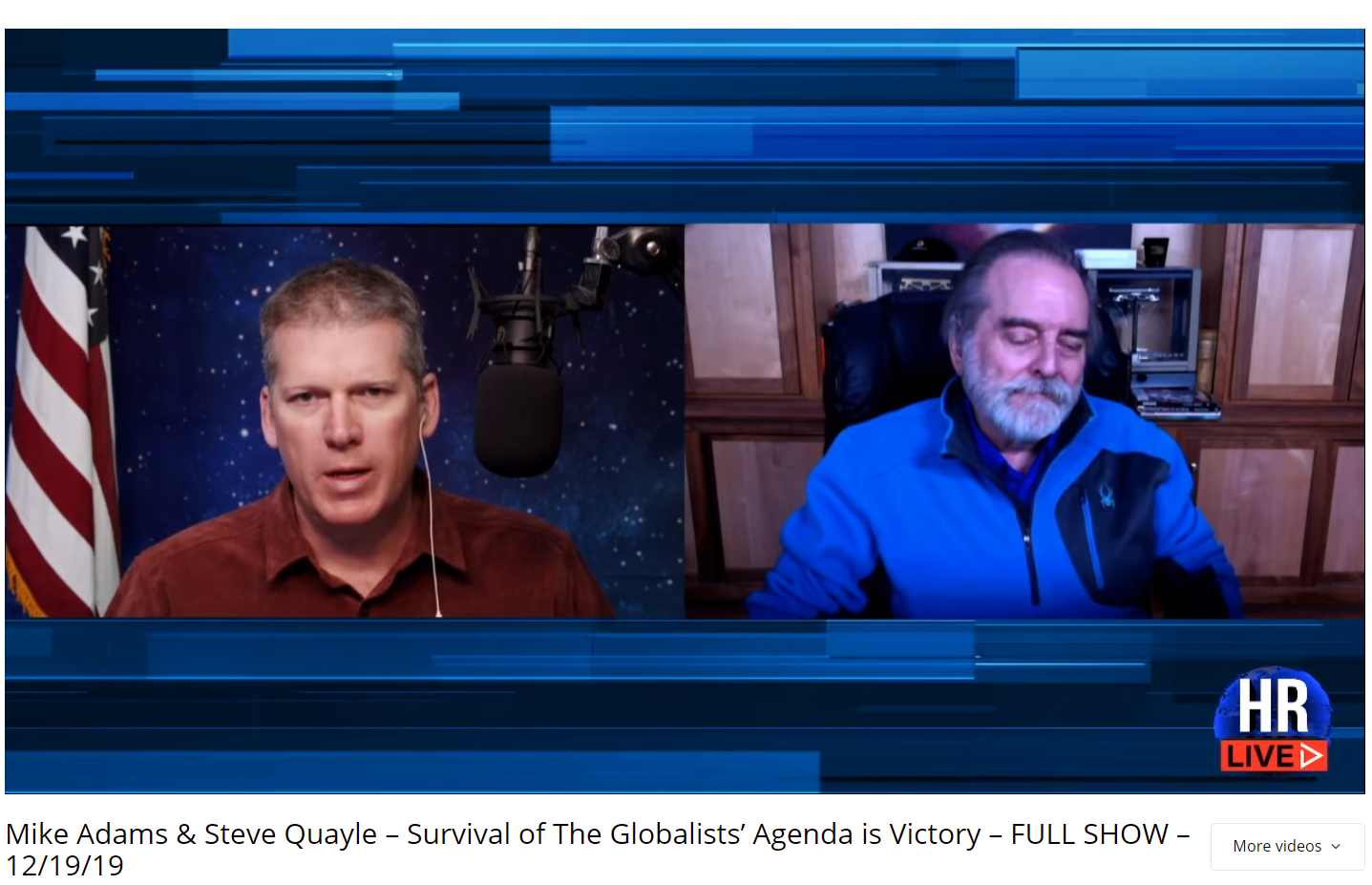 For whatever reason, the stars aligned today as I joined Steve Quayle and Doug Hagmann on the “Hagmann Tonight” show to discuss a whirlwind of hard-core topics: 5G beam weapons, bioengineered vaccine depopulation weapons, gene transfer technology and “genetic morphing” effects, survival against the globalists, the rise of demonic influence in the transgenderism agenda, the coming attempted civil war ignition in Virginia and much more. (Two full hours of nearly uninterrupted bombshells…)

Watch the full video interview at this link.

(Note that the voice sync delay in this video is not anything due to my studio or audio gear. It seems to be a video capture sync issue on the recording side, and I’ll mention this to Doug in our next conversation.)

Without any real planning, this just turned out to be one of the most fascinating unscripted discussions of the year, according to listeners and fans who have been hammering my phone text and Steve Quayle’s email after seeing the full show. (Which is nearly two hours, almost uninterrupted.) I still haven’t quite figure out what specifically has generated this response, honestly.

“People are e-mailing me saying it’s one of the est shows they have ever heard,” exclaims Steve Quayle on his website, SteveQuayle.com. And I’m being texted bizarre messages like, “You guys were on fire! MORE, PLEEZE!”

Doug Hagmann is an American patriot and investigator who has over the years become a legend in alternative media. You will find some of the most provocative and well-informed guests on his show, which is a long format, unscripted discussion that declares no topic out of bounds.

Doug had seen my “Oblivion Agenda” presentation in Branson, MO earlier this year, and he was so intrigued by the information, he invited me to join his broadcast tonight with Steve Quayle. That presentation, if you’re curious is available on this DVD set from GenSix.com. (Not an affiliate link. I’m not compensated for DVD sales.)

So without any particular topics in mind — not even a single sheet of bullet points or anything — we dove into some of the most mind-bending subjects of our modern era, including geoengineering, terraforming and the chemical alteration of the atmosphere as part of a globalist agenda to literally exterminate humankind.

Doug was a very professional host, and I enjoyed the talk. People are raving about it, which I suppose comes from the unique combination of all three of us being on the same show at the same time. Steve Quayle’s mind contains an absolute treasure chest of knowledge about ancient civilizations, extraterrestrials, giants, exotic weapon systems and, more recently, plate tectonics and radical geological activity across the West Coast and Pacific Rim.

You’ve simply got to hear this highly unusual combination of the three of us laying out truth bombshell after truth bombshell on so many subjects, you’ll have to listen twice just to absorb it all.

Somebody remind Hagmann that he needs to launch his channel on Brighteon.com so we can make sure if he’s ever banned by YouTube, we’ll have safe copies of all this knowledge on Brighteon!