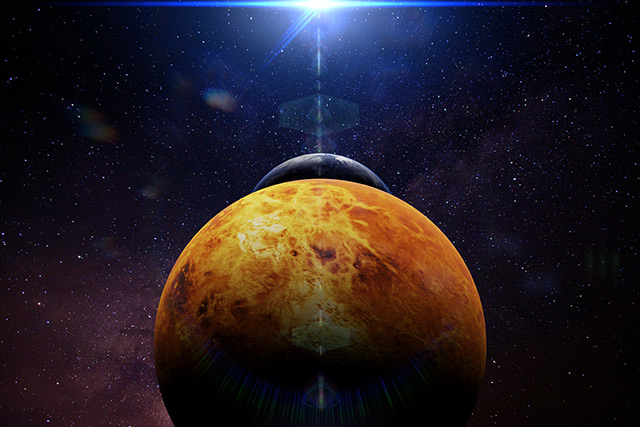 The extreme temperatures on planet Venus are not suitable for supporting life. But a new study found that sunlight on Venus’s clouds could enable microorganisms to thrive by means of photosynthesis.

Researchers at California State Polytechnic University Pomona report this in a Sept. 27 study published in Astrobiology. They note that photosynthesis occurs all day on Venus – even at night – because of the thermal energy levels on the planet’s surface and in its atmosphere. The presence of light energy above and below the clouds allow microorganisms to live in different cloud layers.

Lead study author Rakesh Mogul says: “Our study provides tangible support for the potential for phototropy and/or chemotrophy by microorganisms in Venus’s clouds. The acidity and water activity levels potentially fall within an acceptable range for microbial growth on Earth, while the constant illumination with limited UV [ultraviolet light] suggests that Venus’s clouds could be hospitable for life. We believe that Venus’s clouds would make a great target for habitability or life detection missions.”

Mogul and his fellow researchers write in the study that Venus’s clouds could be partially made from neutralized forms of sulfuric acid, such as ammonium bisulfate. This results in the clouds having higher water levels and a more suitable environment for life to develop.

“The aerosols in Venus’s middle clouds could harbor water activities that are tantalizingly closer to the limits of oxygenic photosynthesis,” the researchers write. (Related: NASA says that aliens live on Venus, but they’re only microbes.)

“[Microbial] survival in an aerosolized and water-restricted environment could include bio/chemical strategies to reduce vapor pressure and loss of solution-phase water, similar to microbial strategies associated with freezing point and temperature depression, inhibition of ice formation and cloud condensation,” they continue.

The study also finds that Venus’s atmosphere blocks most of the harmful UV radiation from the sun – similar to how the ozone layer functions on Earth. According to study co-author Yeon Joo Lee of Germany’s Technical University of Berlin, Venus’s surface receives 80 to 90 percent less UV-A levels compared to that of Earth’s. The planet’s clouds also completely block UV-B and UV-C rays, the most harmful components of UV radiation.

New study contradicts claims that Venus does not have sufficient water

The Sept. 27 study by Mogul and his team contradicts a June 28 study that said Venus doesn’t have sufficient water to sustain life. A research team led by John Hallsworth of Queen’s University Belfast in Northern Ireland has claimed that the planet’s clouds have insufficient water levels to sustain even microorganisms that are able to live in extreme environments on Earth.

Hallsworth and his team have based their findings on various scientific probes – such as the Galileo probe – sent to different planets in the solar system. They have found that the amount of water in Venus’s atmosphere is way smaller than the amount organisms need to survive.

“We find water-activity values of sulfuric acid droplets, which constitute the bulk of Venus’s clouds, of less than 0.004 percent – two orders of magnitude below the 0.585 limit for known extremophiles,” Hallsworth and his team explained.

“In our study, we looked at the effective concentration of water molecules which we scientifically called water activity. We found that the effective concentration of water molecules [in Venus] is slightly below what is needed for the most resilient microorganism on Earth – it’s more than 100 times too low. It is almost at the bottom of the scale and an unbridgeable distance from what life requires to be active,” Hallsworth says.

Study co-author and National Aeronautics and Space Administration scientist Christopher McKay calls the findings for Venus unfortunate, given that he himself is “very interested in searching for life on other worlds.” (Related: Could Venus have harbored life eons ago?)

“We derive water activity of atmospheres without a model of any sort, based only in direct observations of pressure, temperature and water concentration. It’s also unfortunate that our conclusions are based directly on measurements. It is not a model with assumptions, so it is hard to imagine that the results will change as we do further exploration,” McKay says.

Space.news has more articles about planets’ capabilities to sustain life.