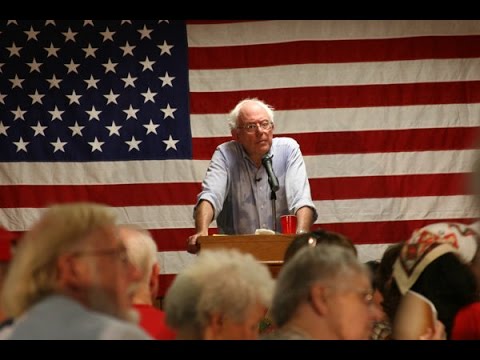 It is being panned as one of the worst, if not the worst, instance of political pandering this election cycle.

During the most recent Democratic presidential debate between Sen. Bernie Sanders of Vermont and former Secretary of State Hillary Clinton, Sanders made an nonsensical, absurd race-baiting claim that is not only demonstrably false, but which alienated even some of his own supporters.

As reported by Vocativ:

The remark inspired an onslaught of a criticism across Twitter and Reddit, with more than 11,000 tweets talking about poor whites during the debate, Vocativ found. Some slammed Sanders’ comment as not only offensive to whites but also to black Americans.

One Twitter user, “CJ,” responded, “My dad, a white guy, grew up so poor he had to catch his own dinner if he wanted to eat. Bernie can go f**k himself.”

“LiberalValuesNetwork” tweeted, “Dunno about Bernie Sanders as a black man I grew up with a bunch of poor white people, racism hits some but poverty spares no one.”

“A monumentally stupid comment, [email protected]. Racist toward both whites and non-whites, shits on all poor people,” tweeted “Meteoryan.”

Sanders also was not spared criticism in one his biggest bastion’s of online support: the /r/SandersForPresident subreddit. One user discussed his own experience as a poor, white American, adding: “I appreciate what he meant by this, but as a poor white guy who lives one step above ghetto level, f**k that s**t. I still support Bernie, but if this was the first thing I’d heard from/about him I wouldn’t give him another look and (would) write him off as another left wing looney who thinks whites are the devil.”

Sanders wants to double down on the already failing policies

There are many more instances of negative reaction to what Sanders said, but you get the idea. Unfortunately, the Democratic Party has been obsessed with race for decades and, in fact, some would argue is home to some of the country’s biggest racists like the Rev. Al Sharpton, Jesse Jackson and Nation of Islam leader Louis Farrakhan.

But beyond the obvious pandering, Sanders’ comment just doesn’t even pass the smell test. To claim that whites cannot relate to or understand poverty or the existence of being “poor” in America is just asinine.

Indeed, you don’t have to live in a “ghetto” to be poor or have a rough childhood. And as a matter of fact, one could argue that the mere existence of ghettos which consist mostly of government-subsidized housing and are rampant centers of crime, are also the fault of Democratic policies. Most large American cities are run by Democrats; most social welfare programs in existence for decades (and have directly impoverished generations of African-Americans) were the creation of Democratic congresses and Democratic presidents.

But rather than acknowledge that these policies have not eradicated ghettos and rather they have only perpetuated their existence, Sanders, an “Independent” vying for the Democratic Party nomination, wants to double down on the very same policies that have failed all Americans of all ethnic groups for decades.

Maybe there is no such thing as white poverty in Sanders’ home state of Vermont.

Poverty exists in America; it always has and, if we don’t change our policies, it always will. As for ghettos, well, maybe most whites can’t relate to life in a ghetto but then again most blacks can’t relate to life in poor white neighborhoods. The thing is, poverty and violence is poverty and violence, and neither of those conditions know skin color.