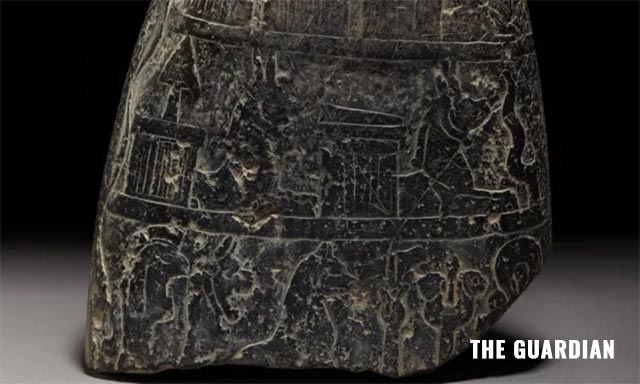 It’s what British authorities are doing with a 3,000-year-old carved stone tablet that promises a “curse” on those who would destroy it – after it was seized at Heathrow airport following a foiled smuggling attempt.

The rare Babylonian artifact, which is said to be worth upwards of a hundred thousand dollars, was handed over by the British government to the Iraqi embassy in a ceremony held at the British Museum.

In the turnover, Michael Ellis, England’s solicitor general and former minister for the arts, heritage and tourism, said that the turnover is a step forward in improving relations between the U.K. and Iraq.

“We are committed to protecting and preserving cultural heritage, both in the U.K. and across the world, and I am delighted that this important [artifact] is being returned,” he added.

The cuneiform stone was illegally taken from the Middle East but was intercepted by U.K. border control officials in 2012. Authorities became suspicious of the cargo, which was declared as a “carved stone for home decoration” made from Turkey and valued at “300” of an unspecified currency. The officer did a quick search of the object in question and phoned the British Museum, where it was verified that it was one of the last few surviving examples of a Babylonian “kudurru.” The kudurru is a boundary stone that contains instructions to record the gift of lands or benefits given to certain people. Authorities believe that the stone was taken from Iraq in a series of lootings that happened in many archeological sites in the country’s southern region between 1994 and 2004.

In a statement to the Guardian, British museum senior curator Dr. St. John Simpson said that the piece is worth placing in the greatest museums in the world.

Referring to how it was found, he added: “Declaring it as ‘carved stone for home decoration’ was being economical with the truth, as they say. A decorative ornament for a rather hefty mantelpiece.”

“It is a very heavy object.”

The artifact dates from the time of Babylonian king Nebuchadnezzar I, who reigned from 1126 to 1103 BC. He is mostly known from his conquest of the kingdom of Elam (currently southwest Iran), where he recovered the cultic idol of the god Marduk. Aside from these feats, not much is known about the ruler – especially since his namesake Nebuchadnezzar II is widely considered to have been the most powerful monarch of the Neo-Babylonian Empire. For Simpson, this provides researchers with a glimpse of a little-known episode of Mesopotamian history, especially one that’s fraught with conflict with its neighbors.

During this time, Babylon was suffering multiple losses with its wars against Assyria and Elam. In the years before Nebuchadnezzar I took the throne, the Babylonian kingdom took heavy losses from the two empires, with one king being led to Assur in chains following a massive loss against Assyria, and the state god Marduk being stolen by Elam in another war. For a time, Babylon was put under direct Assyrian rule from 729-627 BC and would remain that way, until Nabopolassar (the father of Nebuchadnezzar II) liberated the city and subdued the Assyrian capital at Nineveh in 612 BC.

The kudurru was initially thought to be on display in the ancient city of Nippur (now southern Iraq). It contains two columns of text written in the Babylonian language. But these are difficult to interpret since the object is broken and the central portion has been worn down. Still, experts were able to determine that it must have been placed in the temple – since it has curse formulas to protect the monument. The text alludes to the god Enlil and the goddess Eula and mentions Nippur – where Enlil was the chief god – multiple times.

As for the lower half of the tablet, Simpson is hopeful that future digs will uncover it.

“Hopefully, it is still in the ground somewhere in Iraq and may one day be found by archaeologists,” he mused.

Learn more interesting facts about the ancient world at RealHistory.news.