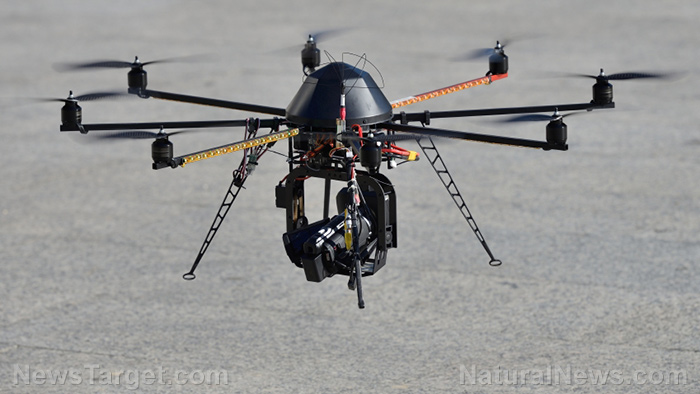 The future of warfare is starting to look more and more like something out of a Terminator movie. Military forces around the globe are increasingly looking toward robots to replace combat soldiers, hoping to keep boots off the ground, while minimizing collateral damage and limiting civilian casualties.

Now, the latest breakthroughs in technology have led to the development of a small multi-rotor drone known as TIKAD, which has been modified to carry multiple different kinds of weapons, including grenade launchers and machine guns.

Produced by a Florida startup called Duke Robotics, TIKAD was developed by the company’s co-founders, Lt. Col. Raziel “Razi” Atuar, a 20-year veteran of the Israeli military and a reservist in the Israeli Special Forces, and two of his fellow soldiers. Defense One reports that the men were motivated by a desire to see the end of “chaotic street battles” that have unnecessarily taken the lives of their colleagues and countless innocent civilians. (Related: Stay up-to-date at NationalSecurity.news.)

“You have small groups [of adversaries] working within crowded civilian areas using civilians as shields,” Atuar told Defense One. “But you have to go in. Even to just get a couple of guys with a mortar, you have to send in a battalion and you lose guys. People get hurt. The operational challenge, it bothered us.”

So, what makes TIKAD unique? Defense One explains:

[P]hysics does not allow the easy integration of a machine gun on a small aerial drone that also has to hover. When a gun fires, expanding gases eject the bullet from its barrel with great force — and exert an equal and opposite force on whatever is holding the weapon. Newton describes this conservation of momentum — more commonly known as kickback or recoil — in his third law. When a person fires a pistol, the backward momentum is transferred through the shooter’s body into the ground. But a low-mass object hovering in the air, like a quadcopter, has no mount. The physical forces that pushed the bullet out of the barrel are going to act on the drone, more than likely knocking it out of position.

TIKAD’s developers overcame this problem by utilizing a system of flexibly connected plates which distribute the “recoil” in such a way that the drone can remain stationary in the air. TIKAD has been specifically designed to carry an M4, grenade launcher or SR25 in any circumstances. The plate system will automatically stabilize the drone, allowing for an accurate shot.

Duke claims that TIKAD will revolutionize the way in which conflicts are solved, and can be deployed in places that cannot be reached by humans or to which soldiers simply should not be sent. Duke notes that each year, the U.S. military spends more than $150 billion on research and development of better solutions for its troops. The company predicts that the military robotic and drone sector will continue to dominate all other sectors of development.

Defense One has confirmed independently that the Israeli government has placed an order with Duke for an undisclosed number of TIKAD units. The U.S. military has also expressed considerable interest in these drones.

Experts predict that in coming decades, all sectors of the military will increasingly choose to send robots or drones into conflict situations. In fact, the Marines are already beginning to implement the use of lethal robots as “door-kickers” in place of humans. (Related: U.S. Navy to deploy weaponized drones in world’s oceans.)

Interestingly, police departments around the country are also showing increased interest in utilizing drones in conflict situations. For example, the Dallas Police Department used a ground bomb disposal robot to eliminate a shooter in a tense situation in July of 2016.

It would seem that the future of warfare is changing. We can only hope that this sophisticated and death-dealing technology does not fall into the wrong hands.