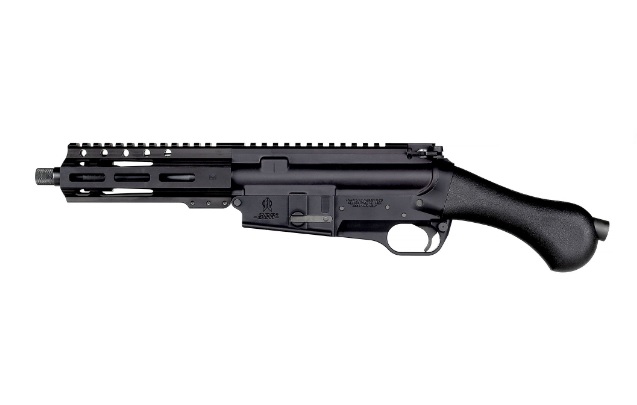 The Fightlite Raider would look right at home in a Star Wars movie. This “large-format handgun” is a pistol designed to overpower pistol- and shotgun-armed enemies with a hail of rifle-caliber bullets.

The Raider traces its ancestry to Fighlite’s Sport Configurable Rifle (SCR). The latter is essentially a smaller and more graceful AR-15.

In turn, the Raider is even more compact than either rifle. Its bolt carrier is only half the length of the AR-15, but it shares the bolt of the older rifle.

The lower receiver and bolt carrier group will accept AR-15 uppers. It also has a hinged tail, which 50 years of experience with the Remington 1100 shotgun show is a sturdy design.

The Raider improves on the fire control group of the original SCR. The wings on either side of the hammer keep the aluminum receiver wall from getting cracked. The safety is a sliding push button at the back of the trigger guard.

Like the AR-15 and SCR, the Raider is a select-fire weapon. Fitelite offers it in 5.56 mm and 300 Blackout chambers. (Related: Pro-gun physician’s group advises: Gun owners do NOT have to reveal info about their firearms to their doctors if asked.)

Users must pull the Raider’s charging handle straight back instead of upward and back. Or they may modify the gun with a non-reciprocating handle mounted on the side. Otherwise, they need to be careful not to bend the handle by accident.

Fieldstripping uses the same two-pin approach as the AR-15. The Raider will pivot open on the front pin but it will not close. Both pins must be removed before the weapon can be reassembled.

The pistol looks sturdy enough to use as a club for self-defense. Its forged receivers support a free-floating, nitrided barrel.

The ventilated aluminum handguard features a hand stop and multiple M-LOK slots. It also has a full-sized Picatinny top rail.

The swivel attachments for the slings can be found on the butt of the pistol grip and the upper receiver.

While familiar, the fire control layout lacks ergonomics. It also doesn’t appear to support the installation of an arm brace for one-handed shooters.

Strangely, the SCR Raider pistol doesn’t come with built-in sights. Users must attach their preferred sights on the top rail.

Unlike most pistols, it doesn’t lend itself to the standard two-handed pistol hold. Instead, hold the front handguard with the supporting hand. Let the hand rest against the magazine well.

The Raider’s accuracy goes up by a large margin if it rests on a sturdy surface. Give it the support it needs by resting it on a car door, fence, or tree.

A properly stabilized Raider outshoots ordinary large-caliber handguns at 25 yards thanks to its free-floating barrel. Hunters can hit a deer with it at distances of 50 yards or less.

The size and weight of the gun make it difficult to track a moving target. It also suffers from a big muzzle jump. While the recoil doesn’t hurt, it pretty much prevents a shooter from taking follow-up shots.

Rapid-firing the Raider from the hip makes it easy to control. Attaching a cheap laser to the pistol lets the shooter keep track of his or her point of aim. Either red or green lasers will do – use a green laser if engaging targets beyond 25 yards.

Read up on other types of guns and , firearms that suit different needs at Gear.news.