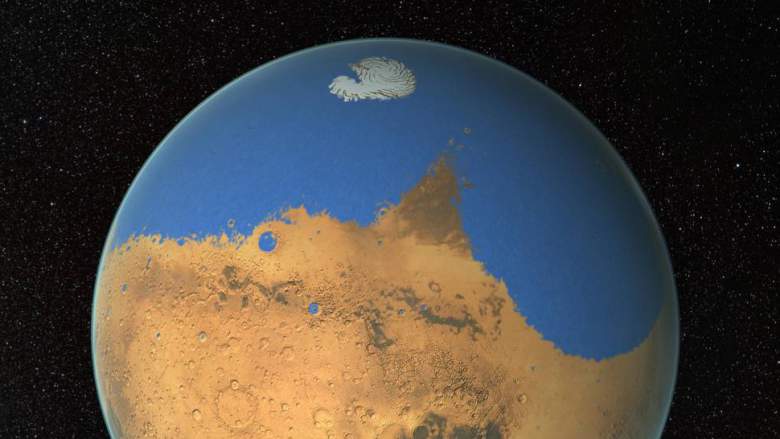 Scientists may have discovered what happened to the water on Mars. Water vapor may have been dumped at the planet’s poles or escaped into space.

A partnership between researchers from the Moscow Institute of Physics and Technology in Russia and the Max Planck Institute for Solar System Research in Germany discovered that the Red Planet has a peculiar water cycle. Through computer simulations, they were able to pinpoint a pattern that helped them trace what happened to water vapor on Mars.

Their findings, which they published in the journal Geophysical Research Letters, may be key to understanding how Mars lost its oceans of water millions of years ago.

A once blue Mars

Mars is a barren planet. The first efforts to explore the planet revealed an infinite desert and no sign of life. However, the existence of deep gorges and recurring slope linea made scientists think otherwise. While not all researchers agree, many support the idea that Mars may have once been a blue planet like Earth. Considering that possibility, it may have been home to organic life forms as well. (Related: Mars surface discovered to have been flooded by water … regions captured in photographs.)

However, the distance and climate of the Red Planet make it difficult to gather data. While some space agencies have deployed their rovers and satellites, such as NASA’s Curiosity and India’s Mangalyaan, Mars still holds a lot of mysteries. One of the questions scientists are most interested in is this: What happened to Mars’ oceans?

A collaboration between Russian and German scientists may have found a clue to the answer.

What happened to Mars’ water vapor?

Previous studies on Mars have shown that the Red Planet does contain water vapor in its atmosphere. This is a key indicator that water can potentially exist in liquid form on Mars. However, scientists have noticed that most of the water vapor travels to the planet’s poles instead of settling down near the equator.

Aside from that, scientists have to find out how water vapor managed to reach the upper layer of Mars’ atmosphere in the first place. Like Earth, Mars’ atmosphere has layers with specific properties. The middle layer of its atmosphere is notorious for its coldness. It cannot sustain water vapor. Because of this quality, it puts a stop to any Martian water cycle progression.

Through computer simulations, the researchers of this study discovered a seasonal “pump” mechanism that can explain how water vapor reaches the upper Martian atmosphere. The answer lies in the Red Planet’s orbit and tilting axis.

Unlike Earth’s climates, the summers on Mars differ between the northern and southern hemispheres. This is because Mars has a longer and more eccentric orbit. During summer in the southern hemisphere, Mars is significantly closer to the sun. This results in a warmer climate compared to the northern hemisphere’s summer. When this happens, it creates a window in the middle atmosphere – at a specific time in a specific place – which allows water vapor to pass through.

Aside from the seasonal “pump,” researchers found that Mars’ giant dust storms contribute to elevated levels of water vapor in the atmosphere.

Dust storms on Mars are harsh and overpowering. Some are so strong they envelop the whole planet, as the dust storm in 2017. When these storms happen, it blocks the sunlight, cooling the planet’s surface. The sun’s ultraviolet (UV) rays stop at the atmosphere, warming the middle atmosphere and creating more ideal conditions for water vapor to pass through.

If the dust storm is exceedingly powerful, it can cause small particles of water ice to form around dust particles. In this form, they are more lightweight and can float more easily in the atmosphere. Thus, in these events, more water vapor ends up in the upper Martian atmosphere.

Once the water vapor passes through the middle atmosphere, some of them travel to the poles, where they will go back to the surface. For others, they escape into space. UV rays in the upper atmosphere may cause the bonds between hydrogen and oxygen in water vapor to break. Hydrogen molecules are released from the Martian atmosphere, leaving oxygen behind.

Researchers believe that the discovery of these processes gives a better understanding of Mars and its history. There are still many questions surrounding the Red Planet. With continuous research and perseverance, scientists may uncover the answers, gaining a deeper insight not only of Mars but also the whole solar system.